The practicum brings together students from Michigan State and the Lilongwe University of Agriculture and Natural Resources (LUANAR). While MSU students bring more of an outsider’s perspective, LUANAR students have grown up shopping in Lilongwe’s markets.

“MSU students are asking questions, whereas the LUANAR students may assume they have the answer to a challenge,” said White. “The beauty of mixing the students together is that all students are forced to look at things differently and ask questions in ways they haven’t before.”

While LUANAR student Mathews Ng’omacheza has been going to these markets his whole life, it wasn’t until he participated in the practicum that his attitude toward vendors changed.

“I have really understood the situation surrounding vendors and now have empathy towards their situation,” he said. “The practicum has enabled me to understand the market dynamics, unlike in the past when I would go in the market, buy things and move out without looking critically at the situation.” 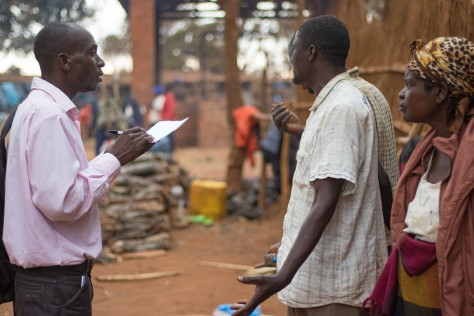 The practicum also altered the way he thinks about social and economic change, said Ng’omacheza, who studied agricultural economics at the LUANAR.

Empathy as pathway to innovation

Often, a better food system is thought of as a more technically advanced food system but that is not always the case, White said.

“Food related issues are often treated as technical issues without any sort of empathy. So intervening to change them comes as an imposition from the top down,” she said. “Change needs to start by listening to those most affected, to really understand what could make it better.”

This is why students in the practicum spend over half of their time in Lilongwe at the markets talking to vendors and gaining perspective on their situation. The students go in ready to learn from vendors, and treat them as experts on the market.

“If the students do not have an appropriate sense of empathy that represents what’s going on with the vendors,” said White, “then they can’t speak knowledgeably to the decision makers.”

Bridging the gap between vendors and local authorities

During the last week of the practicum students begin meeting with market decision makers like the Mitundu market committee leader, the director of commerce for the Lilongwe City Council and a district council representative.

The grand finale of the two-week practicum is a student presentation to a room full of government officials and market decision makers.

“These students are given a platform that really no one else there has,” White said. “Getting decision makers to understand what the students have learned from vendors is a huge part of the practicum.”

“It seems the authorities have no interest in the welfare of vendors in the markets,” said 37-year-old Ng’omacheza.

Unfazed, he continued to convince market authorities to have empathy for the vendors, to build appreciation for their role in providing food security to Lilongwe, and to show that supporting the vendors results in a more profitable food system for all.

If vendors prosper, the country will be assured of urban food security and the government will have an increased tax base for its revenue,” Ng’omacheza said.

The possibility of creating a more sustainable market not only inspires students, but offers hope to vendors as well, said Dr. Andy Safalaoh, associate professor of agriculture at LUANAR.

“The vendors felt empowered because that opportunity was never there for solutions before,” Safalaoh said. “And the solutions are coming from within, not being directed upon them from a top-down approach.”

What’s next for the Frugal Innovation Practicum?

Ng’omacheza said the practicum should lean on the LUANAR faculty and students in Lilongwe to push for policy reform that directly impacts the vendors.

“The FIP experience is still in me now and I don’t see it fading,” he said. “LUANAR should meet and convince members of parliament on the importance of such a policy that protects urban food security so that members can support it and pass it.”

White said her hopes for the future of the Frugal Innovation Practicum are similar in that she wants to see progress extend past the two-weeks of on-the-ground work. She’s working on ways to develop the program into an educations, service-learning opportunity that’s operated year-round.